This is a special request from my elder daughter. You know, I never bought hotdogs for her in the past because the hotdogs I normally see in the market is made from pork meat, something that her father doesn't allow her to eat. Hubby was born and raised in Turkey, a country with majority of the population is Muslim, so he isn't used to eating pork meat and or anything with pork in it. As a matter of fact, you can never find pork meat or products with pork as one of the ingredients in Istanbul alone.

Anyway, during one of our trips to the grocery, a salesperson approached us, offering a free taste of Filipino-style hotdogs under the brand called Virginia. Hubby said, no thank you, I don't eat pork. The salesperson replied that it doesn't have pork in it, then I remember Askim's request to have hotdogs for her baon. She said her closest friend at school always brings rice and hotdogs for snack and she wants it, too. End of the story, we tasted the hotdogs, liked the flavor, and included a pack to our cart. 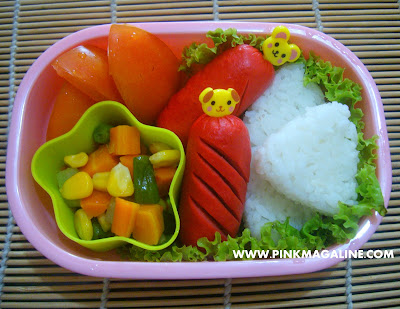 Now here's the bento lunchbox I created for my grade-schooler with rice and cocktail hotdogs. 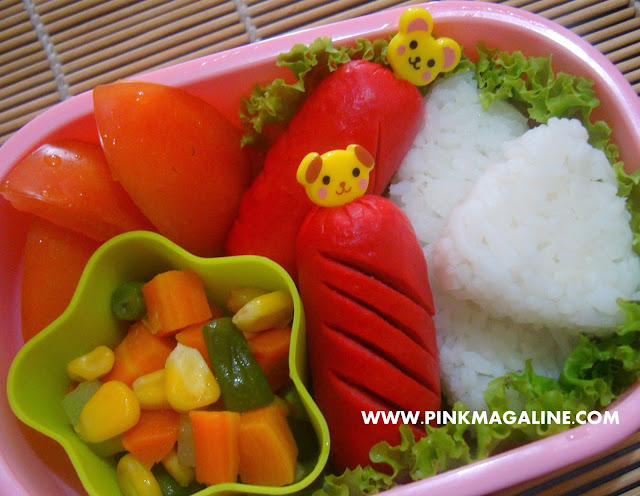 I added tomato slices and buttered mixed vegetables for her side dish.


Hubby and I agreed to avoid always giving our kids with processed meat. As much as possible, we will limit buying hotdogs and sausage to once or twice a month. As for the pork consumption, I do have the freedom to eat it, though sparingly, thinking that too much fat is unhealthy. On the other hand, hubby is strict about not giving them to kids. With respect to his personal choice of not eating pork and applying it to kids, I agreed. However, when kids are all grown ups, they will be given the freedom whether to have or not to have pork in their diet. Hubby now allows our daughters to consume pork. One day he was having fried chicken, he saw our baby daughter following his every bite of that crispy meat and it all started from there. The kids are allergic to chicken and egg, they can only have it once a week or nothing, now they are given pork or beef other than fish and some seafood as a source of protein. Yey! :)