10 Things I Think You Should Never Say to Someone Pregnant

As a pregnant woman, I receive tactless comments and questions from people I know to strangers I meet outside. Others would probably shrug their shoulders or laugh these things off, but I am sure there are women out there who can relate to my situation. I already reached the final month of my pregnancy, but honestly still can't get over with those things that I think shouldn't be told to pregnant women like me. 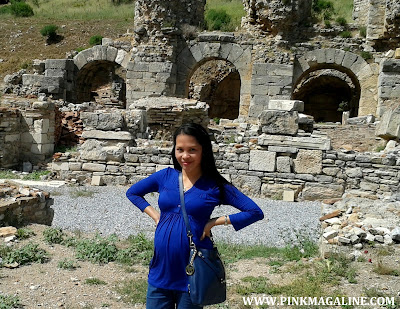 Me and my 6 month old belly touring around Ephesus in Turkey.


1. Buntis*
This is plain annoying. To call a woman that way instead of her given name is rude. Okay, she is obviously pregnant but you don't have to say that to her face. It's like calling Peter pilay after he injured his foot and started using crutches.

2. You look like you're ready to pop. You are huge, bigger, swollen..  blah blah blah!
The last thing a pregnant woman wants to hear is a comment on her size or the way she looks, so stop talking about her appearance before and during pregnancy. That is very rude.

3. Any crazy body changes yet? Do you have stretchmarks? Dark underarms?
I don't get it when people would actually ask this to someone who is gestating. Who knows what else she's going through aside from dealing with those changes? Besides, who would be comfortable to talk about it? Tsk tsk tsk!

4. Are you and the father of your child still together or getting married?
Seriously?! Is that your concern at all? These questions are too personal. Please do not expect she'll share these things to you.

5. You should have a girl (or boy).
Whether her baby is a girl or not, she cannot do anything but accept it. So, you don't have to say this as if she can decide the gender of her child.

6. There is no doubt you are having a girl/boy. I can tell by the shape of your tummy, size of your nose, etc.
I know right? People will predict your baby's gender in the most unscientific way. A friend of mine was told a number of times that she was having a baby boy because of dark rashes on her neck. Her baby's gender was revealed on the 6th month through an ultrasound and guess what.. it was a baby girl all along!

7. You must breastfeed your baby.
It's like saying she'll be the worst mother if she doesn't breastfeed her baby. Everyone knows the importance of breastfeeding. However, it is a personal decision and it is all up to the mother whether she chooses to breastfeed or not. Remember though that parenting isn't all about breastfeeding alone. There is more to that.

8. Oh yes, you are eating for two!
This is an annoying remark. You'll surely embarrass a pregnant woman by saying something like this to her. She needs extra calories for her baby to grow so leave her alone!

9. You shouldn't wear this or that.. do this or that.. etc.
I was told by someone that makeup and nail polish are not advisable for pregnant moms, that I shouldn't use them as they may cause congenital problems. Arggh!

10. Labor is the most excruciating pain in the world.
This is another annoying thing to hear. It could freak a woman out esp. those who are pregnant for the first time.