I noticed these giant billboards of Bench facing EDSA-Guadalupe on my way home from school last week. I tried to look closely until I recognized the new face of the clothing brand. It is Liam Hemsworth a.k.a. Gale Hawthorne of Hunger Games! I didn't have my camera that day, so I brought it with me today and took a few shots while waiting to board the MRT. 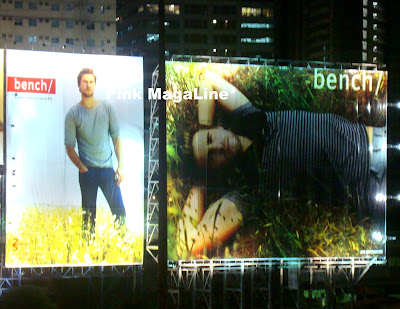 Looking hot! Soon to be wife Miley Cyrus must be very proud of him. 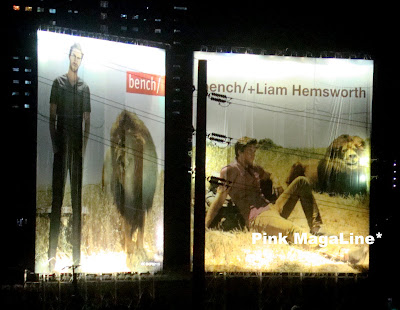 The Australian born actor signed to be the newest international endorser of Bench according to Ricardo Lo's column in PhilSTAR last Saturday. He reported and I quote:
Confirmed: Bench has just enlisted Liam Hemsworth as its newest endorser.
The deal came on the heels of the brand’s recent acquisition as models such A-list stars as Joe Jonas (who was a recent Manila visitor to drum up for Bench); Michael Trevino (of hit US TV series The Vampire Diaries); Hollywood actress Lucy Hale; and Korean superstars Dong Hae and Si Won (of Super Junior).
Bench has just also signed up a K-Pop superstar (subject of a Funfare blind item last week) whose identity Funfare is not yet authorized to reveal. The STAR did a one-on-one with the guy in Seoul two weeks ago.

Bench boss Ben Chan was in L.A. last week to finalize the contract with Liam and supervise the pictorial for the Bench posters and billboards.