I was just watching SALT on HBO a while ago. When I opened my favorite online magazine and saw this photo of Angelina Jolie, Brad Pitt and son Pax viewing LACMA's (Los Angeles County Museum of Art) Chinese collection... I couldn't help but smile. Finally, the very famous Holywood celebrity couple are getting married! 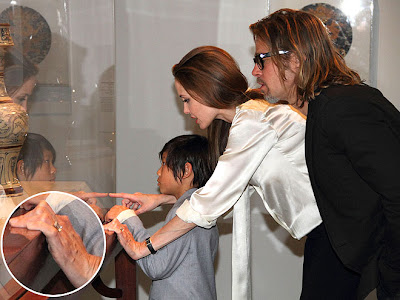 Seen in this photo is a ring designed by Robert Procop with (they say) a huge help from Brad Pitt. Robert Procop is famed designer who collaborated with Angeline Jolie on "The Style of Jolie", her very own jewelry line. 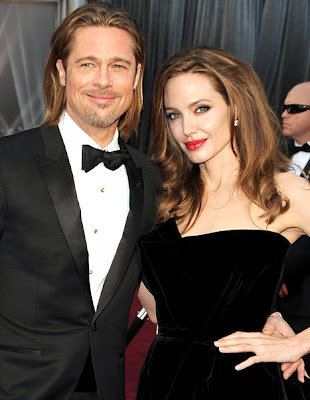 Brad and Angie, also known as Brangelina, have 3 biological kids namely Shiloh, Knox and Vivienne and 3 adopted children, Maddox, Pax, and Zahara. They have been together since 2005 and their relationship began after the movie Mr. & Mrs. Smith.

"We're getting a lot of pressure from the kids. ... It means something to them and they're, you know, they have questions when their friends' parents are married and why is that? ... We will someday. We will. ... [But the kids say], 'Get mommy a ring!' Okay, I will, I will."

Don't we just love happy ending? Maybe Brangelina really meant for each other after all and they'll we stronger like celebrity couples Tom Cruise and Katie Holmes (TomKat) or David Beckham and Victoria Adams (Posh and Becks).

Yay, excited much with the couple tying the knot; also wondering if Angie's going to wear a red gown!

Are you fan of Angelina Joline or Brad Pitt? Or both?