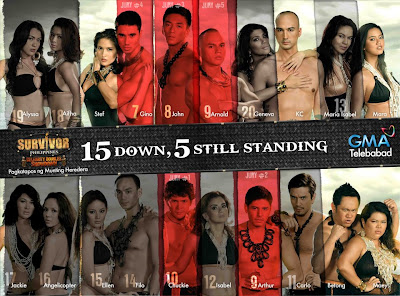 From a total of 10 celebrity couples or 20 castaways, last night, the final 5 were finally revealed. KC, Stef, Mara, Maey and Betong were left after Arnold of the Philippine Volcanoes was voted out.
On Mara: I totally agree with Stef when she said Survivor is not the place to fall in love. Poor Mara. She kinda reminds me of Jeff Gaitan from Season 2 who had a mutual understanding with her fellow castaway, Marvin Keiffer. The guy is cute and sweet so I couldn't blame Jeff. But Arnold? No!
On Stef: She is doing good. I mean, she works while in the shelter, pushes to her ability on challenges and votes wisely on tribal councils. Others call her maarte, I think she can possibly make it until the final 3.
On Maey: I can't believe this girl. She showed a lot of strength in immunity challenges and finally beaten Arnold with the balancing of pole challenge. She is just too kind that she gave back the immunity bracelet to Mara. Tsk tsk tsk!
On Betong: Very funny guy and lovable castaway too. A lot of people sympathize to this guy especially when he wanted to win a reward challenge for his very sick friend but lost it to Arnold. He didn't win anything yet, but let's see 'cause he might be a part of the final 3.
On KC: After Geneva decided to quit Survivor, KC moved on, played even without a double. I think it was better that way. His game is simple and he is also one of the most loved among the castaways. He stands as a threat to his fellow castaways but I guess his reputation as an good player will be able to take him to the final 3.
Among the five, I think I would want either KC or Maey to win as the sole survivor. Let's see!
Photo Source: facebook.com/survivorphilippines
at January 25, 2012