I was born and raised in a small Philippine island, so I am used to eating fish. Actually, a wide variety of it. As of these days, my number one favorite fish is blue marlin. The best blue marlin recipe I ever tasted was in Palawan. How could I ever forget its very delicious taste? 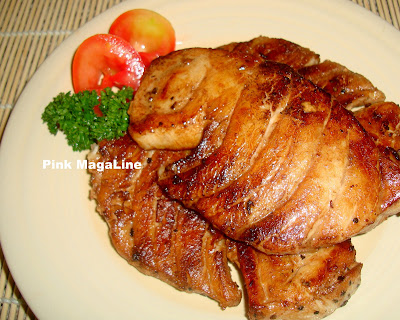 After the holidays, I went to a wet market in a neighboring city to buy a two week supply of fish and seafood. That day, I was lucky enough to find my favorite blue marlin. I sprinkled just a salt and pepper, then marinated it in a little soy sauce and calamansi juice. After marination, I grilled the fish fillets until golden brown. After cooking, I tasted them right away and I swear, it was almost as unforgettable with the one I had in Dos Palmas in Palawan. A little more practice and it will be a total winner. Do you like eating fish too? What is your favorite seafood?
I did a little research of the benefits in eating fish and here it goes.
---
Healthy diets almost always contain fish, a protein food with fewer calories than other meat sources. It's also one of nature's most versatile foods. As well as different species of fish, you can steam, bake, fry or poach fish. It's great raw in the form of sashimi, anchovies, carpaccio and gravlax. But there have been conflicting health messages around the benefits of eating fish.

Long regarded as low in fat and high in "good fats," the health benefits have been overwhelmed by concerns about the environmental problems caused by over-fishing and health risks caused by pollutants.

But last October the Harvard School of Public Health reviewed existing studies that looked at the health effects of eating fish -- and the jury's come back in favor of... eating fish!

The oils in some fish appear to reduce the blood from clotting by reducing the stickiness of the blood. The most beneficial fish in this context is oily fish such as salmon or mackerel. The researchers also suggested that eating that amount of fish or fish oil intake reduces total mortality by 17 per cent.

Studies have shown that fish alleviates a range of ailments.

Prostate cancer: A Swedish study of 6000 men over 30 years show that men who did not eat fish between double and trebled the risk of developing prostate cancer compared to those that did. Fish also contains selenium, thought to have cancer-fighting properties.

Depression: The omega-3 fatty acids contained in fish are believed to raise levels of the brain chemical serotonin, which aids in reducing depression. Skin: Some dermatologists say that a salmon rich diet acts like a facial -- smoothing out age lines.