My First Time at Wensha Spa

I have visited a few salons and spas, but never been to a sauna for a massage, steam bath and the like. A couple of weekends ago, hubby suddenly thought of spending a night to pamper ourselves. Together with brother-in-law and his gf, we drove from Boni to Makati, looking for a sauna/spa center, until we reached Pasay where Wensha Spa is. 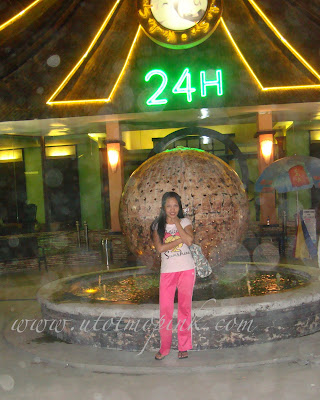 Wensha Spa is always crowded on weekends. A lot of customers flock their place because of the very affordable sauna and massage services they offer with free buffet meal and hot pot for only P680 (less than $20). When we arrived at the spa that weekend around 10:30 PM, we were told to wait for a short while 'cos they ran out of towels. By 11 PM, we were already at the hi-techlocker room, changing clothes, and getting ready for the jacuzzi. Err, I call the locker hi-tech because the locks can be activated by their designated watches that customers are required to wear during the entire stay.

Moving on, one funny thing about our first time at Wensha was when my BIL's gf and I wore swimsuits for the jacuzzi. Well, she suggested we take swimsuits with us and I agreed. We didn't know that Wensha Spa doesn't allow any form of clothing for the sauna rooms and jacuzzi. Whew! The reason why the rest of the girls were giving us weird glances until an employee came to tell us the rule. Hahaha!

Taking a shower is a must before dipping the hot and cold tubs. After the shower, we slowly immersed ourselves in the hot jacuzzi, just chatting while watching the big screen. Then, we tried the dry sauna for 10 minutes and dipped to the hot water right after. The steam bath was our last stop. We did not expect it to be very strong. We ended up staying in there for only 3 minutes! We could've tried the cold jacuzzi after the steam bath, but the boys already called us so we rushed to the shower and off we went to join them for eating.


The buffet table was filled with Chinese food. They had soup, salad, fish, beef, rice, noodles, and vegetable on their menu. I only liked the noodles best. I went to the buffet table twice for it. Though we saw other people enjoying the hot pot, we did not bother to try it ourselves. Personally, I was afraid I won't like it and pay P300 for leftover (part of the rule) 'cause my idea of a Chinese hotpot includes seafood, different kinds of mushrooms and balls, wantons and dumplings. Yeah I know, one cannot expect a lot from a P680 spa package, right?

My favorite part of the entire experience is the one hour massage which we had after a short rest. Covered in towels and wearing only the spa shorts, I was given a very relaxing medium massage using mineral oil. Since it was already midnight, I couldn't help my eyes but sleep. The kind lady woke me up when she was done just to ask if I needed stretching, I said no, signed her receipt for my tip, then tried sleeping again. If not because of the cold temperature and the Chinese lullaby at the massage room, I guess we stayed some more to doze off. We left around 1:30 AM even they say customers are allowed to stay a maximum of 6 hours to enjoy the package they signed for.